At Media Day, it seemed like every other question asked of the players was about high expectations for this season. With 15 returning starters from a 9-win team, that didn’t come as much of a surprise. There wasn’t much we didn’t know about the Navy team back then. There certainly was on Saturday, though, with Tago Smith replacing an injured Keenan Reynolds at quarterback against Texas State. Now there was an element of the unknown. How would Navy react to its new signal caller? How well would Tago direct the offense?

Pretty well, as it turns out.

The Mids rumbled for 352 yards on the ground on the way to a 35-21 win in front of the second-largest crowd in Texas State history. Noah Copeland led the way with 116 yards, followed by Smith, who added 85 yards and 2 touchdowns. The sophomore quarterback also threw for 117 yards and 2 more TDs on 5 for 7 passing (with an interception). It was Navy’s 9th-straight game of 300+ rushing yards, and the Mids improved their record to 2-1 heading into this weekend’s NMCMS opener against Rutgers.

As it became more and more apparent that Tago would be getting the start, my concern for the game was that Coach Jasper wouldn’t be able to run the full offense with an inexperienced quarterback. Against a defensive coordinator that has had some success against the option in the past, that could mean trouble. As it turns out, Navy was able to run everything it needed to adjust to the Texas State game plan.

Texas State did a couple of things similar to Temple. Like the Owls, they did a lot of shifting before the snap. When the Navy offense would look over to the sideline to get the play call, the defense would change the way they were lined up:

(One thing to note here… The ESPNews broadcast was produced terribly. It was hard to capture some of the best examples of the plays I wanted to show you because they’d linger on cheerleaders or unnecessary zooms on players or replays for too long and we’d miss the beginning of the next play. Joel Meyers and Al Groh get an A for their work in the booth. Whoever was in the truck gets a D-.)

Again, like Temple, the alignment didn’t really matter unless they shifted to something that gave up a numbers advantage. More important than the way they lined up was what they were doing after the snap.

Texas State spent most of the game in what I’ve been calling the “Western Kentucky defense,” with two down linemen and the nose guard replaced by an extra linebacker. One of the two inside linebackers would still attack the line of scrimmage, but in theory the interior OL wouldn’t know which one so he’d be tougher to block. In theory. It doesn’t really work that way. Regardless, more important to the offense was what the Bobcats were doing in the secondary. For most of the game, Texas State lined up with three safeties: 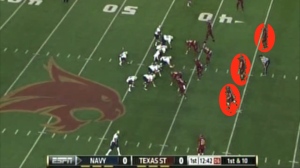 The idea behind this is to take away the offense’s inherent numbers advantage. In most defenses, there are two players in the secondary that the offense has to block out of the base spread formation– a cornerback, and the play side safety. Normally, the WR blocks the corner and the PSA blocks the safety stepping up in run support. (They switch assignments when the corner lines up closer to the line of scrimmage, which is what we saw most of this game. The PSA has a better angle to block the corner if he blitzes). By lining up with three safeties, the defense can now have two of them in run support, with the third rolling over the top in pass coverage: 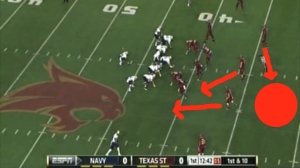 This means there are three defenders out of the secondary, but only two guys blocking them. Depending on what the defense is doing with their linebackers, you could have the PST block one of the safeties, but that would potentially leave one of the linebackers unaccounted for.

Navy’s heavy use of the midline is why the QB and FBs got 50 of Navy’s 57 carries.

The Mids also got an assist from the Texas State defense in attacking the middle of the field on Navy’s first drive. Whenever Texas State lined up with three down linemen, #1 in the count would always play outside and give Tago a give read. The fullbacks had a lot of room to run:

Once Navy showed that they were able to attack the middle of the field, the middle safety couldn’t be committed to attacking the outside. That’s when the Mids were able to find success on the pitch:

When Navy was able to succeed in pitching the ball, Texas State started firing their corners:

The corners would blitz, but Texas State didn’t always have a safety rolling over to compensate. Sometimes the safety would still be playing like he was expecting the midline. With no safety help, the wide receivers were left completely uncovered, which led to Tago’s two touchdown passes. Just to make sure the safety wouldn’t be there, Coach Jasper used twirl motion to get the safety’s first step away from the direction of the pass:

That was the essence of the chess match. It went back and forth like this for the majority of the game. There was one other quirk that was somewhat interesting. On Noah’s long run on the first drive of the second half, I thought at first that it was a designed handoff off tackle. It was actually a triple option play. Whenever Navy would line up in a double flex formation, a down lineman in the “WKU” defense would line up so far inside that he took himself out of the count. Now the outside linebacker was #1, and the cornerback was left unblocked as #2. With one of the defensive backs being left unblocked by design, the PSA and WR were free to block the two safeties tracking outside. Noah took a wider path to account for the new blocking scheme, which is what made it look like it was an off tackle play:

So, what are the takeaways from the offense in this game? First and foremost, Tago played very well. Not perfectly, but well enough that we can feel pretty confident in the offense with him at the helm. The Bobcats were very aggressive in using their secondary to put pressure on the quarterback. Tago responded well. This also wasn’t a limited version of the Navy offense either; it’s unlikely that the offense would have looked any different in this game with Keenan at the controls based on what Texas State was doing. If the concern before the game was that Coach Jasper wouldn’t be able to make the adjustments he’d want to make with Tago under center, that proved not to be the case.

Before you get too crazy with the “Tago is the next Staubach” talk, there’s still a lot we don’t know. Texas State didn’t really try to confuse Tago read-wise, so it’s hard to say how he’d react to some of the more complicated stunts some defenses use. We also don’t know how comfortable the coaches are with Tago making calls at the line of scrimmage. His passing could probably use a little work, too. While he made a couple of decent throws, it appears that Tago’s arm only goes one speed. Not every pass has to be a frozen rope, and with a little bit of touch on his throw, his interception might have been a TD instead. That’s something that can and will be worked on, and will improve over time. Overall, though, the most important thing is that we didn’t see anything that would make us think that Tago won’t be a fine option quarterback.

With Texas State being the most aggressive defense Navy has faced this year, it’s reassuring that fumbles weren’t a problem this week. It wasn’t a perfect performance, though. The slots had a tough time blocking the corners, and there were frequent mixups in blocking assignments between the slots and receivers. This was especially obvious in the second half. There were two drives in particular that ended in somewhat train-wrecky fashion. One drive was stopped after two plays: a missed read by Tago, followed by the next play where the slot and WR blocked the same guy. Then in the 4th quarter, there was a busted play coming out of a timeout:

The other irksome thing about the second half came on 4th and goal on the first drive. The coaches decided to try a sneak on a quick count, which I never like. I get the idea; if the defense doesn’t have a chance to set and dig in its heels, they’ll be easier to blow off the ball to gain a yard. The reason I don’t like it is that Navy’s offense relies more on technique than brute force. Hurrying up to run a play like that takes the offensive line out of their element. I would rather they take their time, set up, and run a play. It’s a judgment call, and admittedly one a lot easier to make with the benefit of hindsight.

Defensively, it was a bit of a mixed bag. On one hand, Texas State could only muster one scoring drive through three quarters, and were held to only 5 of 15 on 3rd down conversions. Defenders did a good job getting into passing lanes too, batting balls down and grabbing an interception. On the other hand, with 11 penalties, Texas State did a lot to stop themselves. The Bobcats had a golden opportunity to tie the game at 7 on their second drive, driving all the way to the Navy 6 yard line. A series of penalties, including a delay of game penalty on the Texas State sideline, drove them all the way back to the 42. The Bobcats were able to get back to the 15, but the ensuing field goal attempt was no good. Had they been able to punch it in there, who knows how the game would have gone. It seemed like that whole sequence really took Texas State out of their element, and they never really got back on track until it was too late.

The biggest problem on defense was that tackling was very poor. I’m not sure what it is about playing up-tempo teams, but for some reason it tends to make the Navy defense play a little more on the reckless side. Guys were overrunning ballcarriers and got caught out of position a lot. At least, I think the tempo played a big part in that. It’s the only explanation I have, because that hadn’t been an issue with the defense before Saturday. Fortunately, with the exception of maybe Western Kentucky, I don’t think anyone left on the schedule is quite as aggressive in getting the play off as quickly as Texas State.

Ultimately, despite the issues on both sides of the ball, this was a good win. I don’t know if Texas State will be any good, but any time you come out with a 2-TD win on the road with your backup quarterback, you have to feel good. The next three weeks are an important stretch for the Mids, so it’s good to have a little bit of momentum on their side.

There is a grapevine in the ranks of all the services. The men make it their business to find out who their officers are. There is a special respect for those who would carry the ball on a football field, throw a wicked block, or make a dead-stop tackle.
-- Slade Cutter